Should You Buy the ScoopFree Litter Box?

I am on a bit of a litter box binge the last few weeks. Mainly because I am really interested in how manufacturers are now building better litter boxes which make our lives a lot easier. The litter box has always been the most odiferous issue with owning a cat. Leave it for a little too long and it gets rather whiffy and your cat might refuse to use it. And as cat owners whilst we all love cats we hate our homes having that “lived in cat smell”. Therefore, litter boxes like the ScoopFree Litter Box by PetSafe are designed to self-clean and keep your house smelling fresh.

So What is the PetSafe ScoopFree Litter Box? 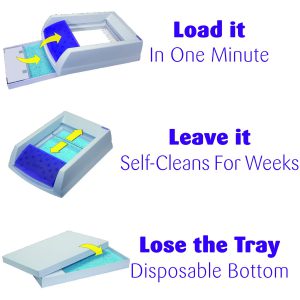 Well, it is as it sounds. The ScoopFree litter box is designed to self-clean so you never have to pick up a scoop again. Does it sound too good to be true? As I like gadgets and my cats like a very clean litter box (they do not use it if there are already deposits in the box) I thought I would give the PetSafe a good look. I’ll be honest I do also like an easy life. When I get home from work I prefer to spend that time playing with my cats rather than cleaning up their poop.

And as the ScoopFree is advertised to only need emptying every 3-4 weeks (for one cat) or 2-3 weeks for two cats. This does sound like I can spend more time chilling with the cats rather than cleaning. It is also advertised as cutting down on litter tracking and as we all know stepping on used litter in the middle of the night is not the best. So does it work and is it worth the price.

What’s in the Box?

My first thought was that the box was much bigger than I expected. This is a huge plus as with a large cat she likes to spread herself out a bit whilst in the litter box. She really does not like being hunched up into a small area. Instead, this box is a good 27 inches long by 19 inches wide.

The ScoopFree also comes in three parts only…

If you get the Ultra version though you also get a litter box lid. (Though this can be purchased separately for the standard box).

Putting it together is simple. Just take the lid off the cardboard box and then place under the open tray. Then place both items on the floor. Place the soiled litter cover into the litter box frame by sliding it into the slots in the frame. Then just pop the frame over the cardboard tray and push the tray up until you hear the magnets click.

And that is all there is to setting up this box. Oh yes, you do need to plug in the electrical cable into a free socket in your house. Then just open up the special silica litter beads and pour into the cardboard tray. When you then switch on the box the rake will run through a cycle and even the surface of the silica beads.

When your cat pops into the box to perform its toilet, a sensor then trips after your cat leaves the box. This sensor will make the box wait for 20 minutes before performing a cycle so that it makes sure that a cat is not in the box before it runs. Because it uses silica gel instead of standard cat litter

Because it uses silica gel instead of standard cat litter, the silica actually absorbs any urine. (Think of the silica gel packets you get with electronics to stop humidity). It also slightly dehydrates any poop. After the 20 minutes has passed a rake pulls through the silica and pushes any solid waste under the soiled litter cover. As this silica litter does not clump then urine doesn’t move into the solids receptacle. Instead, the urine is just absorbed into the crystals in the cardboard tray.

As the urine is absorbed into the silica crystals this keeps down the catty smell.

Then every 3-4 weeks you pull up the frame and slide out the cardboard tray. You then just place the lid back onto the tray and throw the entire thing into the trash, including the silica crystals. So you never have to come into contact with the litter at all.

You then just replace the cardboard litter tray with another one and refill with new silica crystals.

So Does It Work? 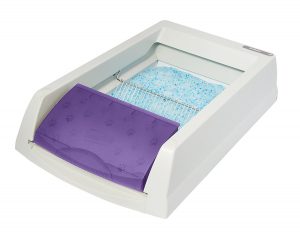 It does work and can work very well. But there are a couple of issues that you can experience. The main issue that I found was that if a cat was prone to very soft poop then that could get caught in the rake. You then have the rather smelly job of wiping off the rake. However, if your cat has very firm poop then this should not be an issue.

Cats are also rather fussy about their toilet habits so it can take a little while for your cat to get used to the new silica litter. This is especially the case if they are used to a clay or other form of litter. However, just put your old litter box near to the ScoopFree and they will probably try and use it. You could also put a little of your old used litter into the ScoopFree Litter Box so that your cat can associate the smells with its toilet.

The timer does work remarkably well and I never had to worry that my cat would be trapped in the box when a cycle started. I also found that though the silica crystals did remove the urine smell quite well, after a couple of weeks I could start to smell the litter box. Therefore, I needed to change the cardboard tray a lot more regularly that the 30 days PetSafe says the ScoopFree lasts for one cat. If you have two or more cats you really need to change the tray more regularly to keep the smell at bay. This is also the case if you have a cat with a urinary tract infection who is using the litter box more often than usual.

There are quite a few pros and cons to using the ScoopFree Litter box.

The ScoopFree litter box will work very well for most people. But do weigh up the pros and cons first. Placing the litter box near to moving air will also help dry out urine much quicker and keep smells down.

Another tip is that you can purchase a “forever” plastic tray together with a bag of silica crystals instead of the cardboard trays. This is especially handy if you have multiple cats and need to change the tray more regularly. You then just empty out the crystals every few weeks and wash out the plastic tray. It does mean that you have to wash the tray regularly unlike just throwing out the cardboard boxes. So it could be less convenient – but you will save money in the long term.

Overall though this is a very convenient litter box but I would bear in mind the cons. I must admit that I do prefer the convenience of my litter robot. BUT, and it is a big but, this litter box is less than a quarter of the price upfront. I would also suggest getting a litter mat as well to stop any litter tracking through your house. Silica crystals are rather more painful to step on than clay based litter.

This self-cleaning litter box also comes with a one year warranty.

Currently, you can get the PetSafe ScoopFree Litter Box here from Amazon.

Let me know how you and your cats get on with it in the comments section below.